Soncino between the Middle Ages and tourist beauties with Marcella Nardi 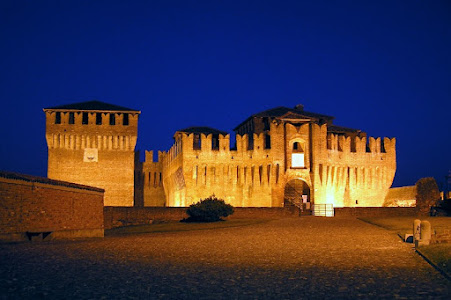 Welcome to my Amazing Italy column I created to share with you all my knowledge and those of the various colleagues who will participate by telling us about Italian places where they were born or lived or who have visited and found particularly interesting.

Today I am delighted to introduce you to my friend and colleague, author Marcella Nardi. Marcella has already been a welcome guest of my Blog and Virtual Cultural Salon several times. Through various interviews, I presented her production of detective stories, thrillers, and detective stories, all available on the Amazon distribution network and available in bookstores. 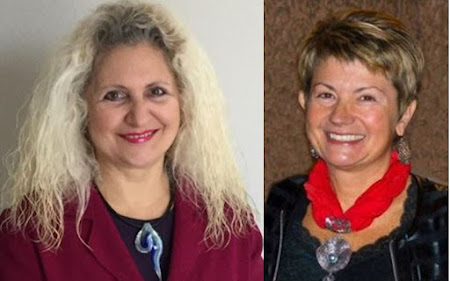 MTDD: Hi Marcella, and welcome back. It is a pleasure to have you here with us again today.

MN: Thank you, Maria Teresa. Happy to be here. It's always a pleasure for me as well.

MTDD: Marcella, although you were born in Veneto, you lived for many years in Lombardy.

Where are you taking us today?

MN: Yes, I lived for twenty-two years in Milan, the city that has adopted me since 1987.

Like all Italian regions, Lombardy also has its charm, between nature, technology, and historical beauties.

Today I would like to talk to you about Soncino. It is a town in the province of Cremona, famous not only for the stupendous Rocca Sforzesca, known precisely as Rocca di Soncino but also because it boasts the presence of the first Italian printing house where the first Hebrew bible was printed.

Today, therefore, I will take you around the medieval village of which I show a map: 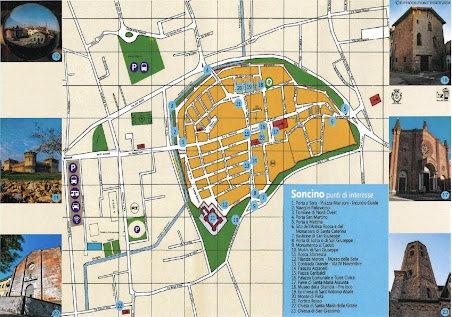 MTDD: Both the map and the reference to the printing of the first Hebrew Bible are fascinating.

What about this town?

MN: As a history lover, I thought I'd start with a few hints about Soncino, its birth, and its Rocca:

From research carried out, it looks like the ancient Castrum was founded by the Goths in the fourth century AD, although ancient artifacts of Roman origin have also been found.

The Lombards, new invaders, made it a military fiefdom. It suffered its first extermination in 773 by Charlemagne.

In 1118 Cremona bought it and built it as a free village and a bulwark of defense against the Milanese and Brescia.

After various destructions, including Federico Barbarossa's in 1186, it was rebuilt and repeatedly disputed between Cremonesi and Bresciani.

In 1247 the Ghibelline Buoso Dovara became lord of the Borgo and ruled the city for about twenty years.

In 1259 the Soncinesi led by General Turcazzano took part in the Battle of Cassano d’Adda against Ezzelino da Romano. The tyrant, wounded, was taken to Soncino, where he died on 8 October 1259, inside the prison of the Civic Tower.

The Borgo, occupied by the French in 1509, passed to the Spaniards in 1535, who erected it as a marquisate, granting it as a fief to the Milanese Stampa family.

The Franco-Piedmontese ended the Austrian domination in 1859, which succeeded the Spanish one in 1707.

Soncino becomes part of the Kingdom of Italy.

MTDD: From your research, it is clear that art and tourism are also two great passions of yours.

MN: Yes, indeed they are. I love this village, of which I made a scale reproduction (see the images) because I am a great lover of medieval architecture. Wandering around the historic center and observing the urban fabric, you can see how Soncino retains the layout of the typical fortified medieval village, which we observe in the streets, squares, and buildings.

Very beautiful is the town walls built by Buoso Dovara, renovated and enlarged by Francesco Sforza in 1463.

The walls are known as "Venetian Walls" because of the renovation operation initiated bthe Venetians before their expulsion. Walking through the village, at the intersection of the two axes of the urban core, the beautiful Piazza del Comune opens up, surrounded by arcades and dominated by the Civic Tower, a building of 1128 with a square plan, which rises from the Palazzo Pretorio.

Looking around the Borgo, the most significant buildings stand out for the greater height of the floors and the terracotta decorations, in the form of ornamental band motifs, depicting festoons, garlands, medallions with cherubs and heads.

The Palazzo Covi and the Palazzo Azzanelli of the fifteenth century are very beautiful. The refinement of these bas-reliefs is related to the expertise and the extended local tradition in using terracotta, used for making bricks, pottery, and decorations.

Anyone who is as dated as me will remember the beautiful film Ladyhawke. Most of the scenes were shot in the fortress.

The history of this beautiful castle is particular and one of a kind due to the high technological level used by its medieval builders. 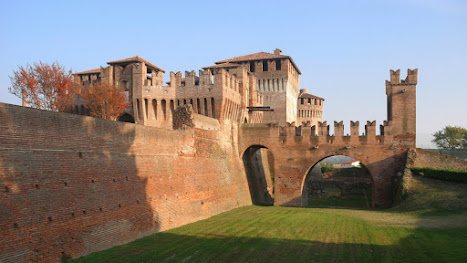 MTDD: Is the fortress still the original one, or was it rebuilt, enlarged, and/or restored over the centuries?

MN: Interesting question. The deterioration of the ancient southeast fortress, the first military construction to defend the village dating back to the 10th century, led Duke Galeazzo Maria Sforza to erect a new fortress to the southwest. The southwest circular base tower results from the adaptation of the pre-existing tower.

The preparation of the new fortress began in 1473, based on a project by Bartolomeo Gadio, to be completed by 1475.

With the fiefdom of Count Massimiliano Stampa on November 3, 1536, the splendid military castle was gradually modified and transformed into a castle to make it residential with some valuable pictorial decoration. The chapel created in the southeast tower was built.

In a state of decay, the fortress came to the Municipality of Soncino on May 27, 1876, through the testamentary bequest of Massimiliano Cesare Stampa, 14th and last Marquis of Soncino.

In 1883, the Royal Ministry of Education commissioned the architect Luca Beltrami to plan its restoration and restoration. Beltrami's intervention represents an example of reconstruction conducted based on rigorous historical documentation.

At the time, it was a superb work of engineering, including hydraulic because the moat was divided into five compartments that could be flooded all or only some depending on the defensive need.

MTDD: What can you tell us about the first Italian printing house born in Soncino?

MN: This is also a fascinating aspect. Soncino has another surprise for us: the first Italian printing house was born in Soncino.

I, who love books and print media, found the Soncino Museum of Jewish Printing Studies Center interesting, inaugurated in 1988 to coincide with the celebrations organized to commemorate a memorable event, the 500 Years of Printing of the First Complete Hebrew Bible. , which took place in Soncino on April 22, 1488, by a Jewish family from Speyer, Germany.

MTDD: Soncino is, therefore, a town as small as it is full of treasures to see ...

MN: Certainly. The Borgo Sant'Angelo mill, also in Soncino, is also fascinating. It is the oldest to have been used for paper production with the systems of the time.

A church that impressed me with its beauty is Santa Maria delle Grazie. It dates back to the beginning of the sixteenth century, and the exterior does not allow you to imagine the beauty that hides inside. The church walls are entirely covered with Renaissance frescoes made by the painters Francesco Scalzi, Giulio Campi, and the Carminati da Lodi brothers.

History has not been kind to this church in Soncino: there was stealing of furnishings by the bishop of Cremona; it became a bivouac of the Napoleonic armies and was later transformed into a warehouse and barn. But perhaps this also contributes to the charm of Santa Maria delle Grazie, one of the things to see in Soncino. 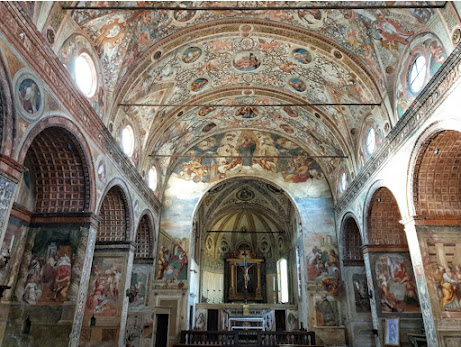 MTDD: Marcella, with a mutual friend, Maria Cristina Buoso, blogger and author, agreed that at each interview, she would present us with a recipe from Rovigo, her hometown, and where she has always lived, or in any case, from Veneto.

Have you also prepared something similar for us? 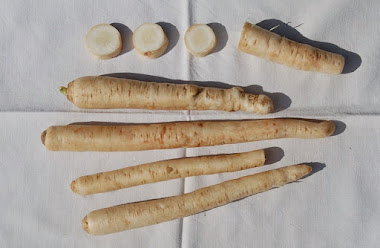 Like many tourists, I, too, want to tell the story of the Gran Bollito di Soncino, which is also widespread throughout the province of Cremona.

The origin of this tradition is quite curious.

During the visit to the Medieval Life Hall, one of the things to see in Soncino, they said that, in past centuries, only the rich could afford meat. The diet of the poor people consisted mainly of soups, vegetables, cereals, and cheeses.

The only opportunity they had to eat meat was to get the scraps from the kitchens of wealthy citizens. The beef was already several days old when it reached them, so people would boil it for a long time to cover the bad smell and taste. Hence the tradition of the Gran Bollito.

Another typical product of Soncino is the roots. It is a winter vegetable, similar in shape to carrot, also used as a medicine (it is purifying and is suitable for the intestine).

For the last fifty years, the Roots Festival has been held in October. 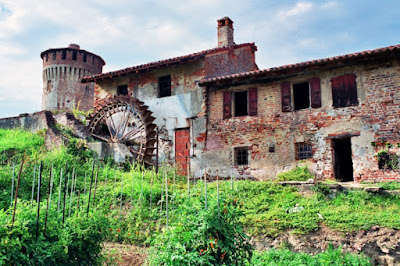 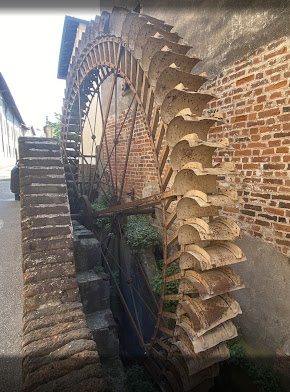 MTDD: Marcella, a particular hobby concerns you that we have not yet revealed ...

Among my many passions, one is to create small-scale environments. In 2005 I built the Rocca di Soncino, also respecting the fact that the four towers are not, in reality, the same.

The most important prize for me was the Pacific North West modeling show, attended by 700 exhibitors, all men except me!

I won the first prize for architectural details. 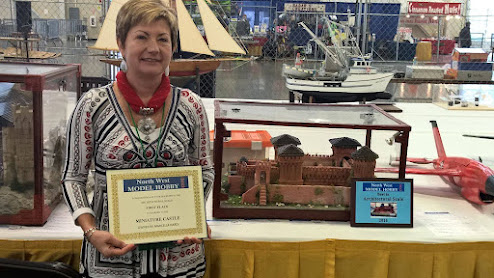 MTDD: Congratulations to me! Thank you, Marcella, for taking part in this interview and for all the information and beautiful images you have provided.

I hope to have my guest again in the future.

MN: Thank you for inviting me back. It is always a pleasure.

MTDD: Would you like to remind those who wish to contact you how they can do so? 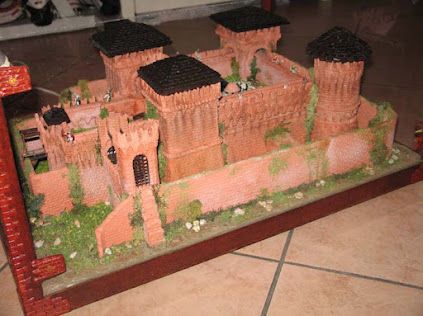 Posted by holistic.coaching.dedonato at 6:32 AM 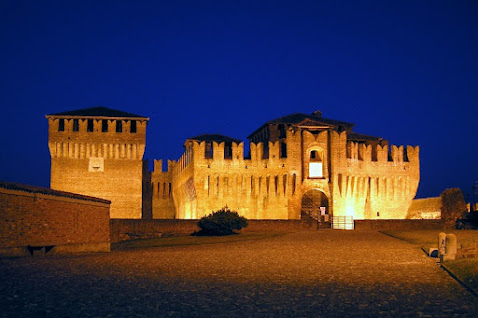 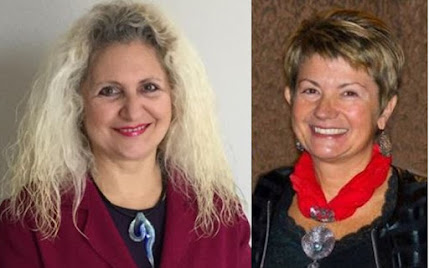 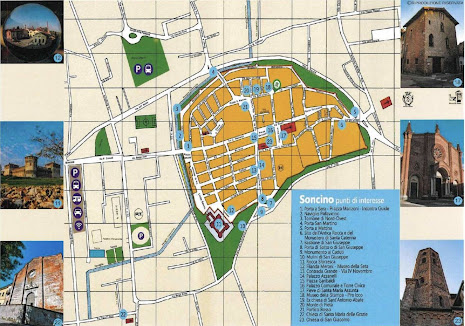 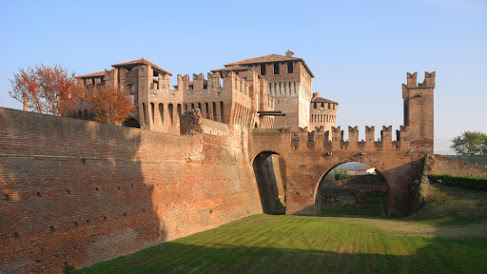 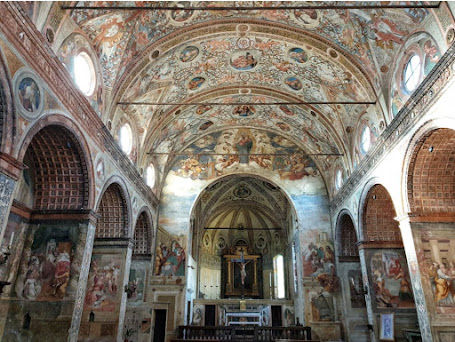 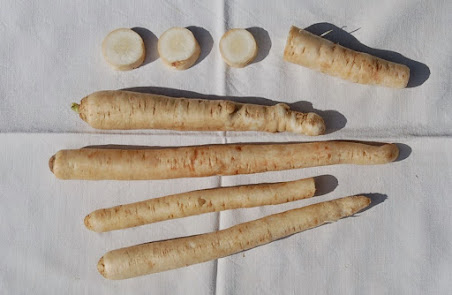 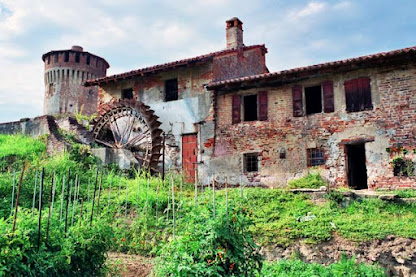 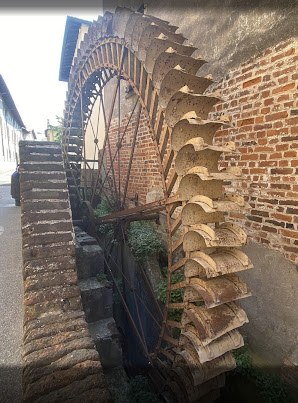 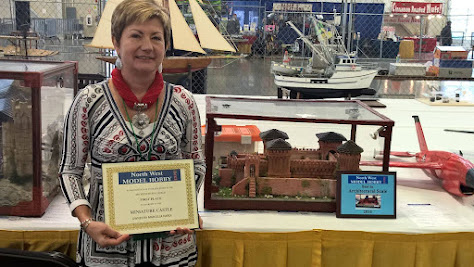 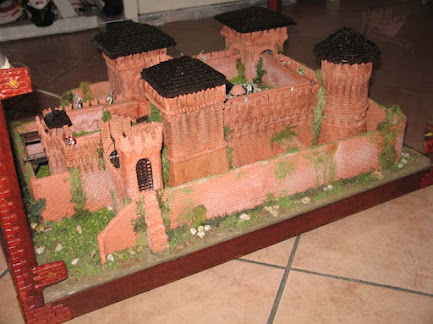 Posted by holistic.coaching.dedonato at 6:31 AM